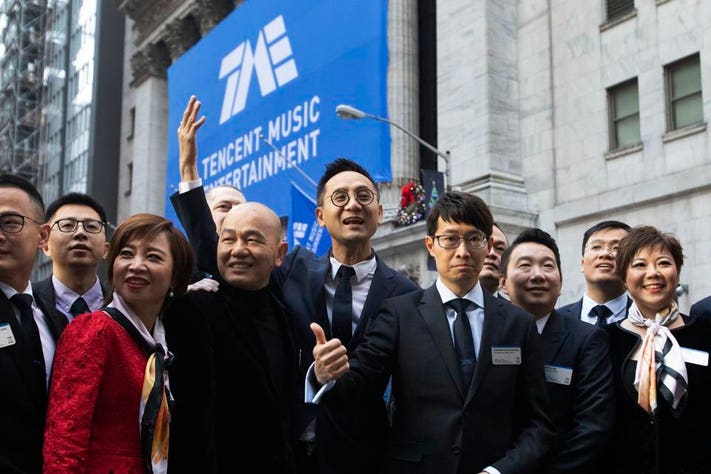 Tao Sang Tong, center, Chairman of Tencent Music Entertainment, joins with members of the company for a photo in front of the New York Stock Exchange prior to the Chinese company’s IPO, Wednesday, Dec. 12, 2018. (AP Photo/Mark Lennihan)ASSOCIATED PRESS

The Chinese music streaming service Tencent Music raised $1.1 billion last week, in what was one of the largest U.S. public offerings of the year. After a hot start where the stock gained almost 10% in its first day of trading, it fell considerably to $12.81 per share from its opening price of $14.10 on Friday.

Even if the price had risen, many music tech investors might have felt that Tencent Music still didn’t live up to expectations. It wasn’t that long ago that the potential valuation of the company was expected to be north of $30 billion (it’s still valued at just over $21 billion), and was expected to have a major influence on the U.S. music scene. That still might happen down the road, but the fact that the IPO was scaled back shows that expectations around music tech have been tempered somewhat.

Much of that has to do with the fact that the market, especially the tech portion, is taking a beating these days, but also because of the performance of Spotify. Spotify shares closed at an all-time low of $125.55 on Thursday, and didn’t improve much on Friday, way off its opening price of $165.90 back in April after its direct offering.

That being said, it could also mean that we have some realism back in this area of the tech market. The fact that Spotify could even be valued at over $30 billion without ever turning a profit seems ludicrous if you take a step back and think about it. At least Tencent is profitable, even though Spotify has double the revenue at the moment, according to Techcrunch.

The fact of the matter is that Tencent’s potential is greater than any other streaming service. It claims to have 800 million monthly users already (which seems like a fudged number if there ever was one) but only 23 million monthly paid subscribers. There’s a lot of room for free to paid user conversions in a country that still has growth left for streaming music.

Getting Chinese subscribers to pay for music is particularly difficult in a culture that takes free music for granted after decades of piracy, yet Tencent has managed to do that thanks to a wide variety of services that include the social WeChat and the WeSing virtual karaoke app – social entertainment if you will.

On the other hand, Spotify doesn’t have a presence in China yet, and the service can’t even be accessed there via another country due to Chinese government geo-blocking. That eliminates probably the largest market in the world for the current streaming leader, at least for now.

Of interest is that Tencent Music holds a 7.5% stake in Spotify, so there’s some corporate synergy that may come into play in the future. The time isn’t right currently, but don’t rule out Tencent as a potential buyer of Spotify at some point, no matter how unlikely that might seem at the moment.

The fact that Tencent still chose to do its IPO in a downturn environment, and was okay with a moderate return, indicates that the company is being run well with its executive’s eyes looking far beyond the next quarter. Doesn’t sound much like a U.S. tech company, does it?

After working many years in the music business as a producer, engineer and musician, I decided that writing about it is just as much fun and the hours are more regular.…MORE

– Bobby Owsinski is the author of 24 books on recording, music, the music business and social media. Read excerpts at bobbyowsinski.com